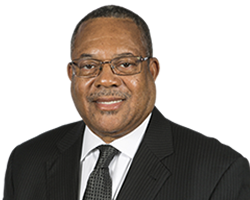 Bringing Clarity and Confidence to Your Financial Future

Woodroe is a frequent speaker to community groups on various financial and investment related topics.

Woodroe Leach earned his Bachelors Of Science degree with a major in Political Science from North Carolina Central University in 1972. He has earned many industry designations including: A Certificate in Financial Planning from Florida Institute of Technology (1997), Certified Funds Specialist (2000), Retirement Income Specialist (2004) and Board Certified in Estate Planning (2008). Woodroe holds FINRA Series 6, 7, 63, and 65 licenses. He also holds a Life, Health and Annuity licenses in the state of Maryland.

Important Investing Information: Not all investments and services mentioned are available in all states. Money Concepts registered representatives are restricted to conduct business only with residents of a state and/or jurisdiction for which they are properly registered. When investing from outside of the United States, you are subject to the securities and tax regulations governing your jurisdiction. Contact us directly for detailed information about investment regulations outside of the United States. Registered Representatives State License Disclosure

Woodroe Leach is an independent contractor of Money Concepts

note: Leach Wealth Management Group LLC is an independent firm and not affiliated with Money Concepts